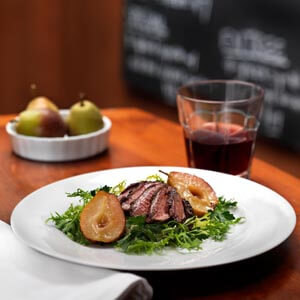 For nine-spice powder: Mix all of the ingredients in a dry mixing bowl. Store the mixture in an airtight container in a cool, dark place for up to 3 weeks.

For pears: Preheat the oven to 400 degrees. Wash and dry the pears and cut each one in half, leaving the stems intact if possible. Use a melon baller or small measuring spoon to scoop out the core of the pear from each of the four halves. Put the melted butter in a mixing bowl with the pears and toss to coat. Add the sugar, salt, and freshly ground black pepper and toss to distribute over pear halves.

Place the pear halves cut side down in a small baking dish and drizzle with any remaining butter in the bowl. Bake the pears for 20 to 25 minutes, turning them over halfway through the baking time. They are ready when the tip of a small paring knife easily pierces the flesh. Remove from the oven and allow to cool to room temperature in the baking dish.

For squab: Lightly season each breast with salt and freshly ground black pepper and dredge with about 2 teaspoons of nine-spice powder. Shake off the excess. Heat a cast iron skillet over medium high heat with 1 tablespoon of the duck fat. Let the fat get hot, but not to the point of smoking or the spice powder will burn. Place the breasts in the pan skin side down and sear for 3 minutes before turning the breasts over. Add the other tablespoon of duck fat and use it to gently baste the skin side of the breasts 4 or 5 times while the other side cooks, about 4 minutes. Remove from the skillet and allow to cool slightly.

Make the salad while the squab is cooling. Whisk together the vinegar with the olive oil in a small mixing bowl. Lightly season with salt and freshly ground black pepper. Place the frisee and parsley in a separate bowl and dress with the vinaigrette. Toss to coat well.

To serve, thinly slice each squab breast into 5 or 6 pieces. Divide the salad between the centers of 2 plates. Place a pear half on either side of the salad and put 5 or 6 slices of squab breast on top of each pile of greens. Drizzle with any remaining vinaigrette.

Fall Away – A Perfect Whiskey Sour