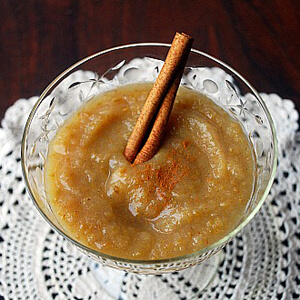 20
Prep Time
30
Cook Time
6
Servings
Says recipe creator Brook Hurst, “Use whatever variety of pear you like (or a mixture). Taste it as you go along, and let your palate be your guide. Just don't reduce the amount of lemon juice; you need the acidity of the lemons because it acts as a preservative. Your house will smell incredible while this mixture of pears, sugar, and cinnamon is simmering away on your stove!”
INGREDIENTS
DIRECTIONS

Combine water, lemon juice, and lemon zest in a large, heavy-bottomed, non-reactive pan. Quarter and core the pears, adding the pear pieces to the mixture as you work to prevent browning. The peel on some varieties of pears is tougher than on others. Leaving the peel on may add texture—you can peel them if you prefer.

Heat the pears and liquid mixture to a strong simmer and cook for about 10 minutes or until the pears become tender. At this point, gently smash the pear quarters with a potato masher.

When the mixture is smooth, continue to simmer, adding ¼ cup of sugar and ¼ teaspoon of good quality ground cinnamon. As the mixture cooks, it will reduce, and the natural sweetness of your pears will really shine. You might not need any more sugar or cinnamon; it’s all a matter of taste. It all depends on the pears used, so just taste it as it cooks and adjust accordingly.

Simmer until it’s reached your preferred thickness, stirring often to keep the sauce from sticking to the bottom of the pan. Ladle into clean jars, run a table knife around the edges to remove any air bubbles, and then wipe rims spotlessly clean. Place a warm seal on the jar, and then screw on a band finger-tight.

Process in a boiling water bath 10 minutes, turn off heat, and let sit for 5 more minutes. Remove the jars from the kettle and let them sit in a draft-free place overnight. Store any jars that didn’t seal in the fridge for up to one month, and put the rest in a cool dark place for up to one year.

If you’d rather not seal the jars, just place the finished pear sauce in a container with a tight-fitting lid, and store in the refrigerator for a month or in the freezer for 6 months. If freezing, remember to leave an inch or so for expansion.