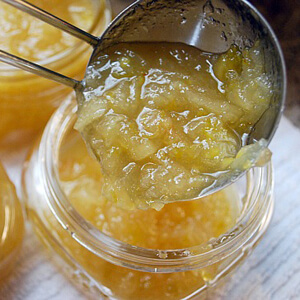 15
Prep Time
20
Cook Time
16
Servings
Preserving blogger Brook Hurst Stephens of Learn to Preserve says of her delicious spread, “Use green unripe (or slightly ripe) Bartlett pears for this recipe. You want the pears to hold their shape not only when they're shredded, but when they're in the preserving pan and in the jar....and later, on your toast! The subtle sweetness of pears is exactly what's needed to deliver the sweet-tart spicy delight of lemons and ginger combined."
INGREDIENTS
DIRECTIONS

Note: Prepare lemons first; you’ll want to be able to pour the lemon juice over the pears (in the preserving pan) as soon as possible after you shred them to prevent oxidation. Oxidation is what causes browning, which isn’t harmful, but you still want to prevent it for flavor, texture, and aesthetic reasons.

Zest lemons, and set aside lemon zest, then squeeze juice from lemons. Tip: Rolling the lemons on the counter firmly before juicing will soften them and enable you to extract the most juice.

Wash, then quarter and core pears, and run them through a food processor fitted with a shredding blade. (If you are going to double this recipe, either work very quickly or do this in two separate batches to prevent the shredded pears from browning before you can get them into the preserving pan and combined with the lemon juice.)

Combine pears, lemon juice, and lemon zest in a heavy-bottomed non-reactive pan, then add sugar and chopped ginger. Stir together just enough to combine all ingredients.

While stirring gently, bring to a boil over medium-high heat just until sugar is dissolved, which should only take a few minutes. Reduce heat to a simmer.

Simmer for approximately 20–30 minutes, or until pears have softened slightly, but the syrup has thickened. You want the shredded pears to still be a bit firm so they hold their shape in the preserves.

At this point you can either cover jars with tight-fitting lids (and store in the refrigerator for up to 3 months, or in the freezer for up to 6 months) or you can process by following the next steps:

Look for any air bubbles in the jars and if you see any, use a knife to remove them before wiping rims clean and sealing according to USDA instructions. Process for 10 minutes in a boiling water bath.

yield: Makes about 4 half pints