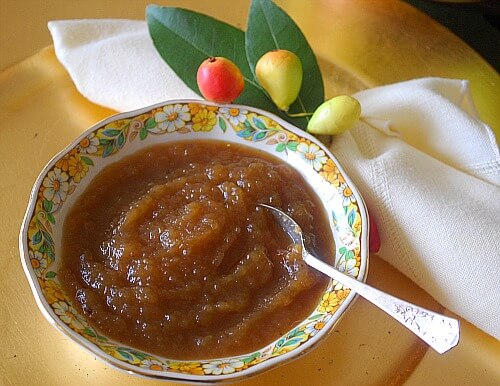 15
Prep Time
20
Cook Time
24
Servings
Preserving blogger Brook Hurst-Stephens of Learn to Preserve says of this delicious spread, “Use golden ripe Bartlett pears for this recipe, not green ones. This is the perfect opportunity to use up pears that might be getting a bit soft. This rich and complex pear butter recipe is perfect for spreading on toast, but also great with whipped cream cheese on a bagel, or in recipes, like layering it in the middle of oat bars or to top off jam thumbprint-type cookies.”
INGREDIENTS
DIRECTIONS

Wash, then quarter and core pears, placing them in a heavy-bottom preserving pan as you work. Add water. Do not add more liquid, the pears will create liquid as they cook!

Bring to a simmer over low heat, then cover tightly with a lid to keep heat and moisture in. Simmer for approximately 20 minutes, or until pears have softened, then remove pan from heat. Mash pears with a potato masher until they are mushy (approximately 15-30 seconds).

Add one 2-3-inch piece of vanilla bean. Add the remaining spices into the pear puree mixture. Stir well to combine. Cook approximately one hour over low heat, simmering constantly. It will be more of a burble than a simmer, because of the thickening nature of the pear butter.

Once desired thickness has been achieved, remove the preserving pan from the heat and remove the vanilla bean, then spoon mixture immediately into hot sterilized jars, leaving ¼-inch headspace.

Note: If you are using vanilla extract instead of a vanilla bean, add it at the end of the cooking process, when you would normally be removing the vanilla bean.

At this point you can either cover jars with tight-fitting lids (and store in the refrigerator for up to 3 months, or in the freezer for up to 6 months) or you can process by following the next steps:

Look for any air bubbles in the jars and if you see any, use a knife to remove them before wiping rims clean and sealing according to USDA instructions. Process for 10 minutes in a boiling water bath.