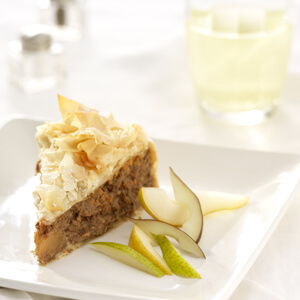 20
Prep Time
90
Cook Time
8
Servings
This recipe was developed by Mark Porcaro of Top of the Hub Restaurant in Boston.
INGREDIENTS
DIRECTIONS

For chicken filling: If using whole seeds, grind coriander and cumin in a spice grinder, or crush with a mortar and pestle. Add cinnamon, ginger, and allspice. Set aside.

Heat canola oil in a deep skillet. Season chicken with salt and pepper, and brown on both sides. Remove from pan and set aside.

Add pears and onions to pan and sauté until lightly caramelized, about 10 minutes. Stir in spice mixture and cook 1–2 minutes until spices are fragrant.

Return chicken to pan. Add broth and cream. Cover and simmer over low heat about 30 minutes until chicken is cooked through. Transfer chicken to a plate to cool.

Continue to simmer sauce until thickened and reduced by half. Beat eggs and yolk; stir into sauce and cook on low heat about 10 minutes until sauce thickens again.

Shred chicken into bite-size pieces and return to pear mixture. Adjust seasoning with salt and pepper.

For pastilla: Preheat oven to 350 degrees. Lightly oil a 9-inch round springform pan. Fold one phyllo leaf in half and place on bottom of pan. Brush with oil. Evenly arrange 8 overlapping phyllo leaves in pan, draping ends over sides and lightly brushing each leaf with olive oil.

Let stand 10 minutes. Combine powdered sugar and cinnamon and sift over top of pastilla. Remove sides of pan and cut into wedges.