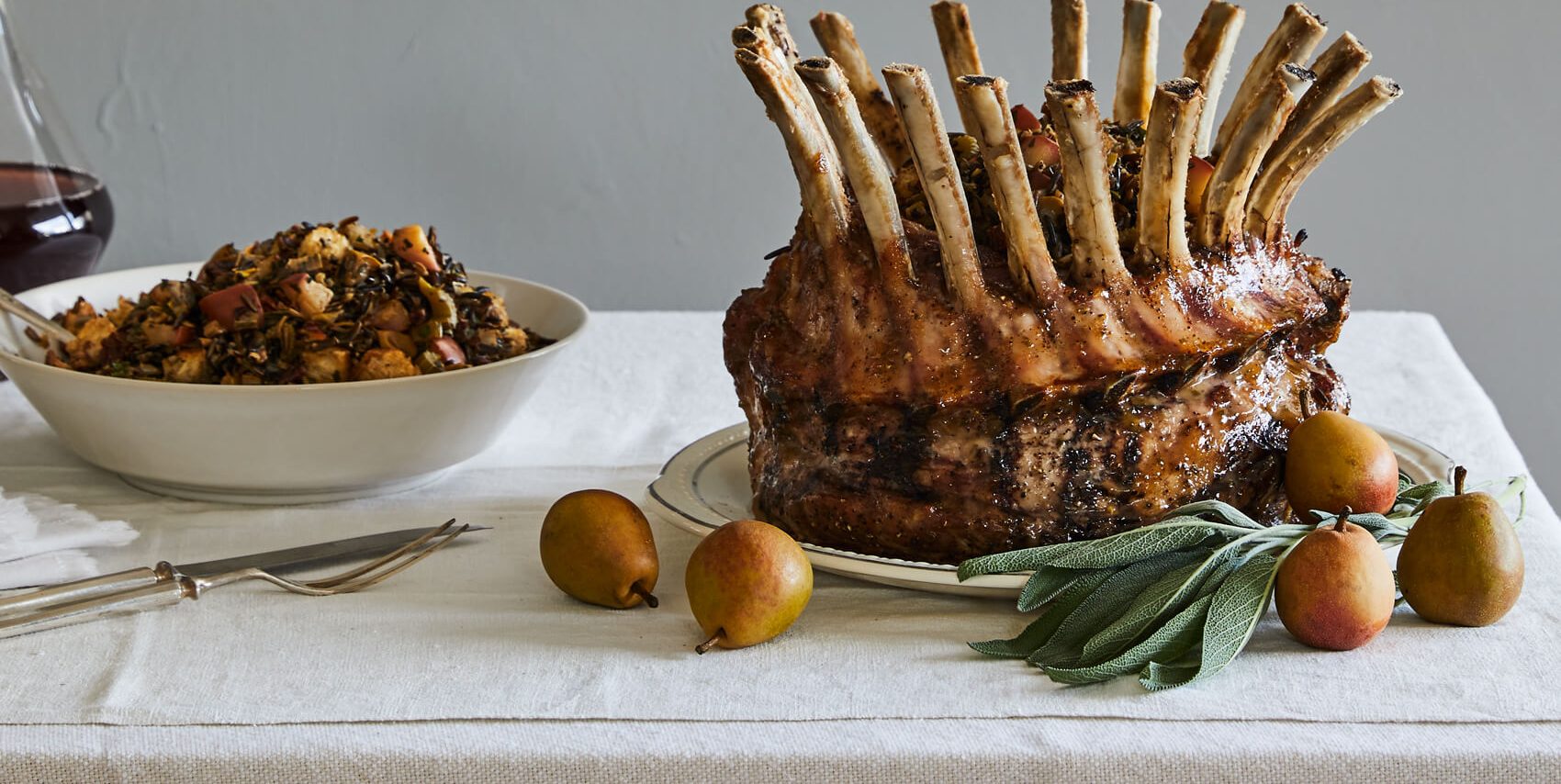 This is your holiday showstopper, folks. If a crown roast of pork seems daunting, don’t let its splendor fool you. First, there’s no need to tie it up yourself, just ask the butcher to do the hard part for you, but be sure to order ahead. Second, the cooking part is as easy as plopping the pre-tied roast on a baking sheet and placing it in a low oven to slowly roast to succulent perfection while you prepare the sides and a savory-sweet pear glaze. The pear glaze is brushed on toward the end of the cooking time, when the oven temperature is increased in order to caramelize the exterior, creating a beautifully lacquered crust. After roasting, the center is filled with a stovetop dressing of wild rice flecked with tender Anjou pears, toasty pecans, and generously seasoned with an herbaceous mix of parsley, sage, and rosemary. Present the crown roast at the table before carving, so guests can marvel at its magnificence.
INGREDIENTS
DIRECTIONS

About 1 hour before roasting, remove the crown roast of pork from the refrigerator and pat it dry. Place it on a large rimmed baking sheet lined with foil, and season the exterior generously with salt and pepper. Wrap each rib bone with a small piece of foil to prevent them from burning. Set the roast aside to come to room temperature.

Preheat the oven to 250°F with a rack positioned in the bottom third. Place the roast in the oven until the internal temperature reaches 140°F on an instant read thermometer when inserted in several places, 2 to 2 1/4 hours.

Meanwhile, make the pear glaze. In a skillet, melt the butter over medium-high heat. Add the pears and brown sugar and cook, stirring occasionally, until soft and browned, about 5 minutes. Adjust the heat as needed to avoid scorching. Add the cider and vinegar and cook, stirring often, until the pears are mushy and the juices thicken, about 5 minutes more. Stir in the rosemary and season to taste with salt and pepper. Transfer the mixture to a blender, or use an immersion blender, and process to a thick purée. Set aside to cool. (The glaze can be made up to 5 days ahead and kept covered in the refrigerator.)

When the roast is cooked to the desired temperature, remove it from the oven and allow it to rest while you increase the oven temperature to 500˚F. (The roast can be left at room temperature for up to 1 hour before finishing.)

Brush the roast with the glaze in a thick layer, coating the outside and inner ring. Return the roast to the oven and cook until browned and nicely lacquered with the glaze, about 10 minutes. Allow the roast to rest for 15 to 20 minutes. At this point, some of the Wild Rice Pear Dressing can be stuffed inside the center of the roast for presentation at the table, or it can be served on the side.

To carve the roast, simply cut between each rib and serve with the dressing.

Preheat the oven to 400°F. Melt 5 tablespoons of the butter and toss the bread cubes with it in a large bowl. Spread the cubes on a large rimmed baking sheet, and bake until nicely toasted, 5 to 12 minutes, depending on the freshness of the bread. (This can be done up to 1 day ahead.)

Melt the remaining 2 tablespoons of butter in a 12-inch skillet over medium-high heat. Add the celery and leek and cook, stirring occasionally, until lightly browned, 6 to 8 minutes. Add the pears and cook, stirring occasionally, until soft and lightly browned, 6 to 8 minutes. Pour in the broth and scrape up the bits from the bottom of the pan. Stir in the rice, pecans, vinegar, parsley, sage, rosemary, salt, and pepper. Cook until heated through, about 3 minutes. If there is room in the pan, stir in the toasted bread cubes, or transfer the mixture to a large bowl to stir it together. Transfer the mixture to a serving dish and serve immediately, or keep warm in a low oven for up to 30 minutes.