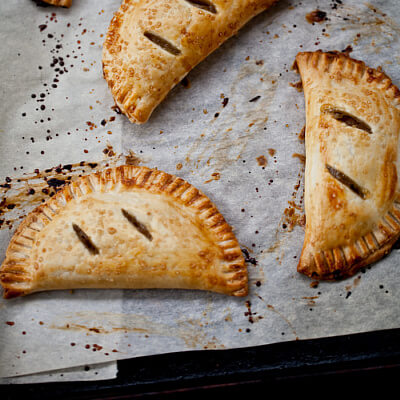 20
Prep Time
20
Cook Time
14
Servings
Tami Hardeman, blogger (Running with Tweezers) and creator of these delightful desserts, says of her recipe, "I have to be honest – it’s really all about the compote filling that gets folded up into these little pockets. It’s chock full of the Indian-inspired spices that I crave with baked fruit: ginger, cardamom, cinnamon. The recipe makes more of this fruit filling than you’ll need – save the rest of it in a mason jar for stuffed french toast, some melted brie on toast or stirred into yogurt."
INGREDIENTS
DIRECTIONS

In a medium sauté pan, heat the butter until melted. Add the diced pears to the butter and cook until they begin to release some liquid, about 5-6 minutes. Add the vanilla bean (and the seeds), agave nectar, dried spices and grated ginger. Bring to a simmer, then reduce heat to low and cook until mixture begins to thicken and the fruit is tender, about 20 minutes. Remove from heat and allow to cool completely.

Working on a floured surface, roll out the pie crusts so that they are about ⅓-inch thick. Using a 3-inch round cutter (I used a large mason jar lid), cut out rounds of the dough. Add a heaping spoonful of mixture to each round and fold over. Using a fork, crimp the edges to seal and place on parchment lined baking sheet. Once done, place the pies in the fridge for 20 minutes.

Before baking, vent each pie on the top with two small slits. Brush each with a bit of egg wash. Bake for 20-22 minutes (depending on your oven) or until bubbling and golden brown – it’s okay if you get some oozing out of the top and sides. They’re supposed to be rustic. Allow to cook slightly before eating – the filling is HOT!