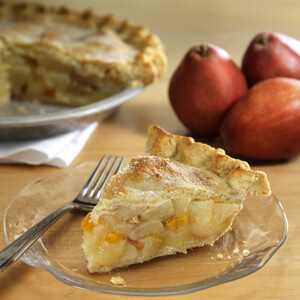 20
Prep Time
50
Cook Time
8
Servings
A flavorful pie combining Red Anjou pears and the subtle tartness of dried apricots. Pecans add a crunchy element, and the acidic quality of the sour cream in the dough matches nicely with the other flavors and the creaminess of the pears. Yogurt or buttermilk may also be substituted for sour cream.
INGREDIENTS
DIRECTIONS

For dough: Put the flour, sugar, and salt in the bowl of an electric mixer fitted with the paddle attachment. Combine on low speed.

Add the butter pieces all at once and let the mixer run on medium low speed until they are pea-sized and evenly dispersed. Add the sour cream and mix for several rotations or until combined, about 7 seconds.

Add half of the ice water and combine on low for several seconds before adding the additional water one tablespoon at a time until the dough begins to come together. If more water is necessary, add it one teaspoon at a time. The dough should be moist enough to stick together when pressed between your fingers. (It will be soft and malleable and will gather together easily—be careful not to overwork it.)

Gather the dough together into a disk and refrigerate for at least two hours before rolling.

Top either with a full crust, or cut top crust into lattice. Crimp crust edges. If using a top crust, cut several slits to vent the pie. Bake for 45-50 minutes or until golden brown. Remove from oven and cool on rack.