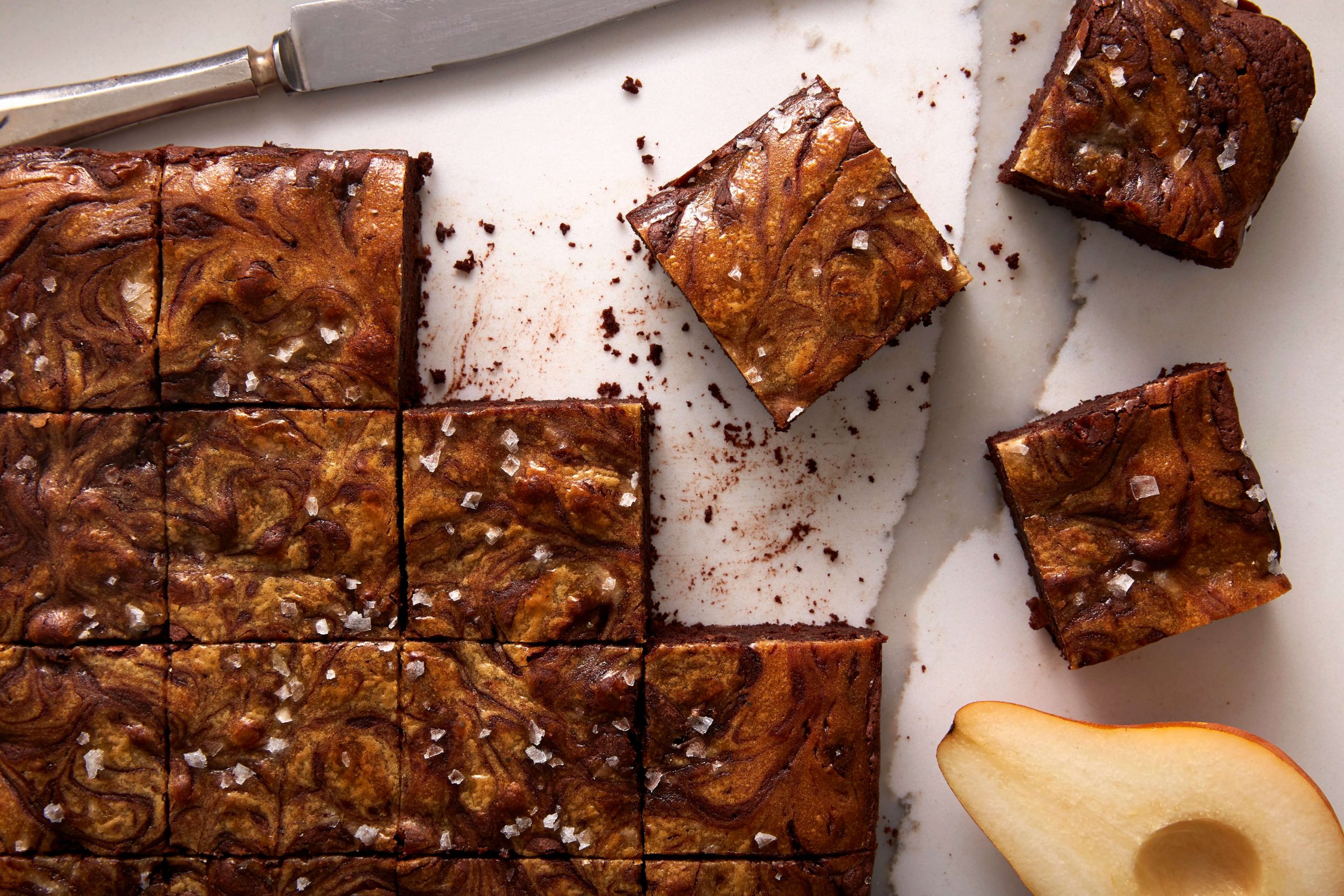 45
Prep Time
25
Cook Time
16
Servings
It’s well known that pears and dark chocolate are a captivating match, but when combined with tahini, AKA sesame seed butter, you have a tasty trifecta. In this recipe, pears are baked into decadent brownies, adding to the fudginess while simultaneously improving the nutrition. They are the perfect combination of fudgy and cakey. Tahini is swirled on top, offering a nutty, savory note that makes them extra delicious, and also easy on the eyes. Beware, it will be difficult to eat just one.
INGREDIENTS
DIRECTIONS

Preheat the oven to 350°F with a rack in the center. Grease a 9-by-9-inch baking pan (preferably metal) lightly with butter, then line it with parchment paper, leaving overhang on all sides to use as handles for removing the finished brownies. (The butter is only to adhere the parchment paper to the pan; nonstick baking spray would also work.)

Combine 3 of the eggs with the granulated sugar, 1/4 cup of the dark brown sugar, the vanilla, and kosher salt in the bowl of a stand mixer or in a large bowl. Beat with the whisk attachment, or an electric hand mixer, on high speed until very fluffy and the sugars are completely dissolved, about 10 minutes.

Meanwhile, bring a medium saucepan filled with 1-inch of water to a simmer. In a medium metal or glass bowl, combine the butter, chocolate, and 2 tablespoons of the cocoa powder and place it over the simmering water. Reduce the heat to low and let sit for 2 minutes, then whisk until the chocolate is completely smooth and melted. Set aside until the egg mixture is ready.

With the mixer on, pour the melted chocolate mixture into the egg mixture and blend on medium-low speed until smooth.

Sift in the flour and remaining 1/4 cup of cocoa powder into the bowl, and use a rubber spatula to stir until combined. Add the pears and gently stir just until they are evenly dispersed. Pour the batter into the prepared baking pan and spread the mixture into the edges of the pan in an even layer, then smooth the surface.

Whisk the tahini, remaining 1 egg, and remaining 1 tablespoon dark brown sugar in a small bowl. Drop the tahini mixture by tablespoonfuls over the batter. Using a knife or skewer, cut through the batter to swirl the tahini and chocolate together. Sprinkle with flaky sea salt, if desired. Bake until lightly puffed and dry on top, about 15 minutes.

Remove the baking pan from the oven and lightly drop the pan on a flat surface once or twice to deflate slightly (this will allow the brownies to be an even thickness once cooled).

Return the pan to the oven and continue baking until a wooden skewer inserted into the center of the brownies comes out fudgy but looks cooked rather than wet, about 5 to 10 minutes more.

Cool completely, and then lift the brownies from the pan using the parchment handles. Cut into 16 bars.

Store the brownies in an airtight container in the refrigerator for up to 1 week.