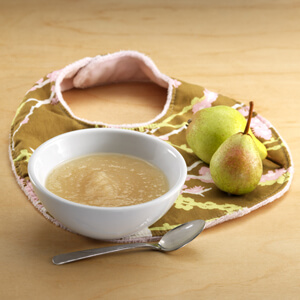 Babies love pears, too! Make your own pear baby food at home!
INGREDIENTS

See collection of recipes below.

All recipes courtesy of www.homemade-baby-food-recipes.com

Make this recipe for your baby without the cinnamon stick the first time you try it. This will help you identify if the cinnamon causes any adverse reactions when you first introduce it.

Peel the pear and apple, remove the core, and cut them into chunks.

Place the pear and apple pieces into a saucepan and add enough water to just cover them.

Add the cinnamon stick and simmer the mixture gently until the fruit is tender. If the pear is very ripe, it may soften before the apple – so remove it first to avoid overcooking.

Remove the cinnamon stick, then puree or mash the fruit to suit your baby’s preferences.

Take a square of foil and wrap the carrot and pear together to form a parcel, sealing securely to hold in the steam.

Bake at 375 degrees until tender, then puree or mash as desired.

Soak the raisins in the apple juice until softened. Peel and core the pear, then slice it.

Arrange the pear slices on a pan and brush with melted butter. Broil, turning occasionally, until tender.

Mix the cooked pear with the apple juice and softened raisins, then puree or mash as desired.

Peel and core the pear, then cut into chunks. Place into a small saucepan and just cover with apple juice.

Add the cinnamon stick and simmer until the pear is tender.

Remove the cinnamon stick, then puree or mash the pear.

Stir the maple syrup into the cream cheese.

Spoon the warm pear into your baby’s bowl and top with a blob of the cream cheese. Yum!

Peel and finely chop the onion, then sauté in the oil over medium heat until golden. Add the broth, squash, pears, and celery and bring to a rolling boil.

Lower the heat and simmer for 10 minutes, until the vegetables are tender.

Add the milk and seasonings, stir well and cool to a safe serving temperature, pureeing if desired.

This recipe is for babies enjoying textured foods.

Peel and core the pear and cut into cubes.

Rinse the quinoa, then combine with the water, nutmeg, and sultanas in a small saucepan.

Bring to a boil, then reduce the heat and simmer (covered) for 5 minutes.

Stir in the pear cubes and continue to simmer until the quinoa has absorbed all the water.

Kid-Friendly Macaroni and Cheese with Broccoli and Pears