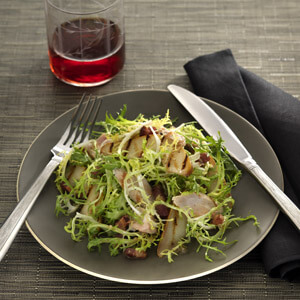 For the dressing, place diced bacon in a heavy bottomed pan. Cook over medium heat until bacon renders most of its fat and becomes crispy, 10 to 12 minutes. Drain fat and set aside.

To make the salad, preheat a grill according to the manufacturer’s directions. Cut pears in half, from top to bottom, remove center of core with a melon baller and cut each half into four equal pieces. Brush pear slices with extra virgin olive oil and set aside until ready to grill.

Season rabbit loins with salt and freshly ground black pepper, brush with extra virgin olive oil and set aside until ready to grill.

Grill pear slices for one minute on each side, or long enough to give pears a grilled appearance and flavor, but not overcook them. Work in batches if necessary. Set grilled pears aside at room temperature when finished.

Grill rabbit loins 2 to 3 minutes per side or until they are almost cooked through. Set aside until cool enough to handle, then slice on the bias.

To serve, combine frisée, grilled pear slices, and sliced rabbit loin in a large mixing bowl. Spoon as much warm bacon dressing as desired over salad, season to taste with salt and freshly ground black pepper and mix thoroughly. Serve with plenty of warm bread.