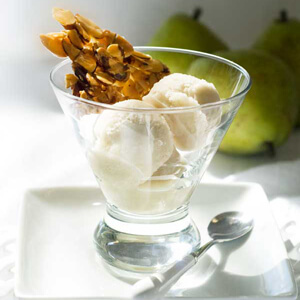 35
Prep Time
25
Cook Time
The ice cream is really creamy straight from the ice cream maker and gets a little bit more of an ice milk-type texture as it cures. A little dash of alcohol will handle that if you prefer a creamier, less grainy texture. Recipe by Carol Kicinski, www.simplygluten-free.com.
INGREDIENTS
DIRECTIONS

For ice cream: Peel, core, and dice the pears into ¼-inch pieces. Set aside.

In a large, heavy saucepan, bring the agave and salt to a slow boil over medium heat and continue to cook until it turns a light amber color and has thickened slightly (245 degrees on a candy thermometer). Stir in the pears carefully; the mixture will seize and bubble up. Continue to cook for 10 minutes. Remove from the heat and carefully stir in about ½ cup of the almond milk. Stir in the remaining almond milk, lemon juice, and pear liqueur or vodka, if using. Allow to cool to room temperature.

Working in two batches, blend the cooled pears and milk mixture in a blender for 1 minute. Strain through a strainer and chill until cold, several hours in the refrigerator or about half an hour in the freezer. Process the mixture in an ice cream maker for about 25 minutes or according to your manufacturer’s instructions. Can be eaten as is or “cured” in the freezer for a few hours.

Store covered in the freezer for up to a week.

For brittle: Preheat oven to 350 degrees. Line a baking sheet with parchment paper or a Silpat mat.

In a separate baking sheet, layer the almonds in a single layer and cook for 10 minutes or until warm and fragrant. While the almonds are toasting, make the syrup.

In a large, heavy saucepan, stir the sugar, water, and salt together to combine. Cook over medium heat until the mixture comes to a boil, stirring until the sugar has dissolved. Once the mixture has come to a boil, do not stir it any longer. Continue to cook for about 5 minutes or until the mixture turns a light amber color, swirling the pan occasionally to ensure even coloring. Remove from the heat and stir in the warm almonds, making sure the almonds are coated evenly with the sugar mixture.

Working quickly and carefully (the mixture is screaming hot!), spread the almond mixture into an even layer on the prepared sheet pan. Let cool until hard, about half an hour. Break into pieces.

Store covered at room temperature for up to a week.