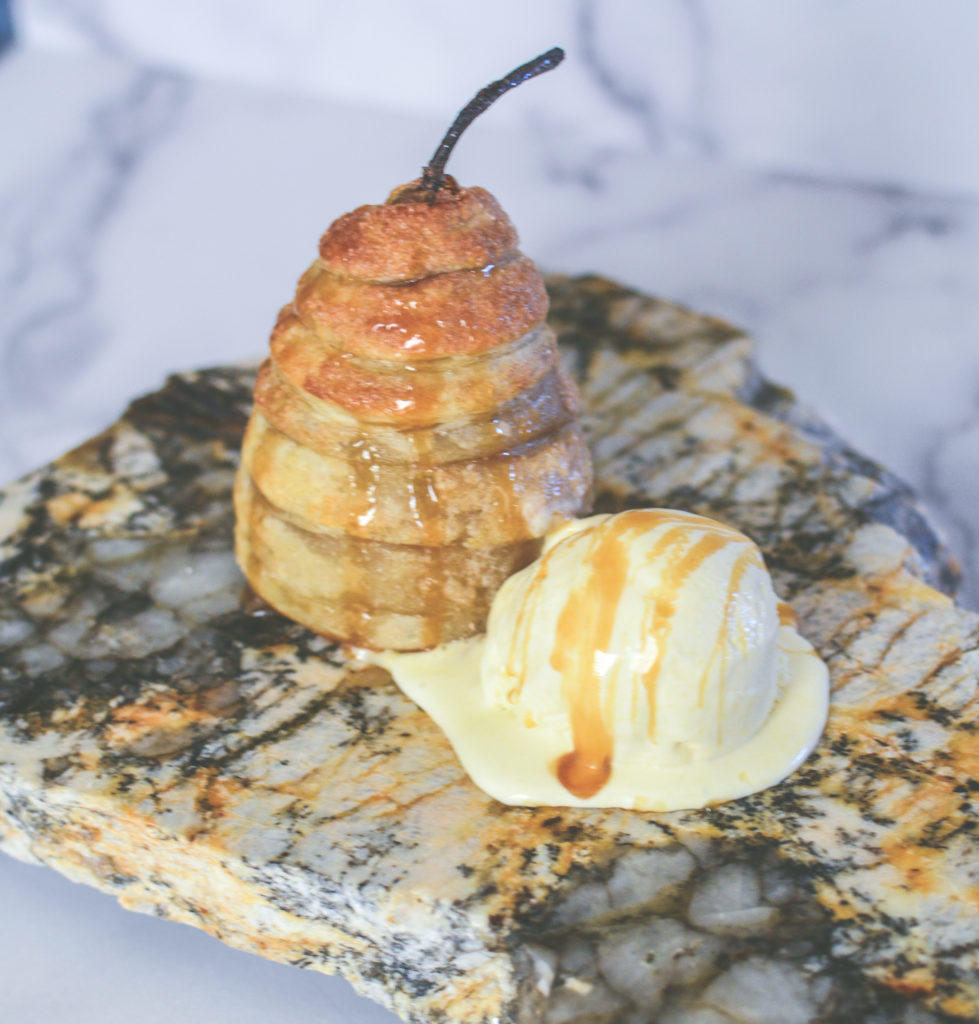 30
Prep Time
20
Cook Time
4
Servings
This easy-to-make-over-the-top dessert is perfect for your next holiday gathering. It’s made with pears poached in a cinnamon honey syrup, wrapped in puff pastry, and served with delicious homemade cinnamon ice cream with a salted caramel sauce. Recipe and photography by Lou Lou Sucre.
INGREDIENTS

Peel the pears with a vegetable peeler, being careful to leave the stems intact. Slice off the bottom of the pears to make them stand up straight.

Using a large pot, combine the honey, sugar, water, and cinnamon sticks. Add the pears. Bring to a simmer and allow the pears to cook on medium-low until they start to soften.

While the pears are poaching, place the sheet of puff pastry on a piece of parchment or wax paper sprinkled with a small amount of flour. Roll the pastry gently to smooth out the wrinkles. Cut the pastry into long strips 1/2″ wide.

In a small bowl combine the cinnamon and sugar. Sprinkle about 1-2 teaspoons of the cinnamon-sugar on the pastry strips.

Wrap the pears, starting at the bottom, with the strips of the puff pastry all the way to the top. Press the pieces together at the seams. Combine the egg and water in a small bowl. Brush each pear with the egg wash and sprinkle with more cinnamon-sugar (about 1 teaspoon).

Place the pears on a parchment-lined baking sheet. Bake for 15-20 minutes or until the pastry starts to turn golden brown.

Remove from the oven and serve with a scoop of cinnamon ice cream. Drizzle with salted caramel sauce.

Warm the half and half, sugar, salt, cinnamon stick, and 1 cup of the heavy cream in a medium saucepan. Once warm. cover, remove from the heat and let steep at room temperature for 1 hour.

Rewarm the cinnamon-infused mixture. Remove the cinnamon sticks with a slotted spoon and discard them.

Pour the remaining 1 cup of heavy cream into a large bowl and set a mesh strainer on top.

Switch to a wooden spoon and continue to stir the egg/milk mixture constantly over medium heat, scraping the bottom as you stir, until the mixture thickens (about 3 minutes) and coats the spoon.

Chill the mixture thoroughly in the refrigerator at least 8 hours or overnight. Freeze it in your ice cream maker according to the manufacturer’s instructions.