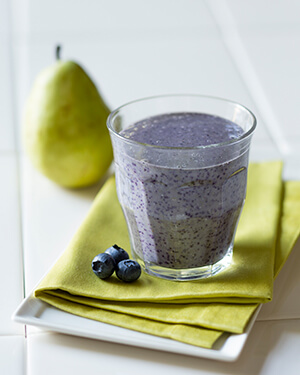 Overweight and obesity rates are at an all-time high, reaching astounding numbers. According to a survey completed by the National Center for Health Statistics, the prevalence of American obesity (BMI ≥ 30) in 2011-12 was 34.9%.

Pears are fat free, and are an excellent source of fiber that contains vitamins and other beneficial nutrients. Several studies suggest that adding pears to the diet aids weight loss, especially when pears replace less healthful or less filling foods.

Recent research supported by Pear Bureau Northwest suggests that the likelihood of being obese was 35 percent lower among fresh pear consumers than among non-consumers.

In a study of 411 overweight women with high cholesterol, eating three pears or three apples every day increased weight loss significantly to 1.22kg (2.7 lbs), rather than 0.88kg (1.9 lbs) for women with minimal fruit intake. Likewise, women consuming fruit had a greater reduction in calorie intake overall, likely due to greater satisfaction after eating. This suggests that eating 3 servings of fruit per day may decrease overall consumption. A significantly greater decrease in blood glucose was also observed among those who had supplemented with pears or apples. Results indicate that overweight women may experience important changes in body weight and metabolic profiles by adding more fruit to their diets.
Conceição de Oliveira M, Sichieri R, Moura AS. Weight loss associated with a daily intake of three apples or three pears among overweight women. Nutrition 2003;19:253-256.

In a follow-up study, it was discovered that eating 3 pears or apples every day aids weight loss and satisfies better than eating cookies that have the same amount of calories and fiber. Women added 3 oat cookies, 3 pears, or 3 apples to their daily diets for 10 weeks. For the women consuming pears or apples, calorie intake decreased significantly but increased in the cookie group. The women consuming fruit also lost weight, about 2 pounds on average, whereas those consuming cookies gained weight (about a half pound). These findings suggest that a diet containing nutrient-dense foods, such as pears, contributes to overall lower calorie consumption and greater weight loss. These results also raise the question of whether the currently recommended amount of daily fruit (2 cups) is enough for those trying to lose weight.
Conceição de Oliveira M, Sichieri R, Mozzer RV. A low-energy-dense diet adding fruit reduces weight and energy intake in women. Appetite 2008;51:291-295.

In a study of 4,539 American adults, higher fiber intake was strongly associated with a lower Body Mass Index. Overall, American intake of fiber was particularly low, averaging only about half of the reference 25 grams/day. However, women who consumed more than half of the 25 g had a lower BMI than those who consumed less than half. In this study, the average BMI was 1.5 kg/m2 less in when women consumed a high-fiber diet, and 2.75 kg/m2 less when a high-fiber and low-fat diet was consumed. The effect of fiber on weight management may come from replacing calorie-dense foods, delaying the return of hunger, increasing feelings of fullness, and increasing rate of bowel movements such that some portion of calories were removed.

The Coronary Artery Risk Development in Young Adults (CARDIA) Study of 2,909 healthy adults found that fiber consumption predicted insulin levels, weight gain, and other cardiovascular disease risk factors more strongly than total fat or saturated fat consumption. This suggests that a high fiber diet may protect against obesity and cardiovascular disease by lowering insulin levels. Insulin is secreted into the blood stream in response to sugar uptake from a meal. The mechanism of fiber is that it slows the absorption of carbohydrates (sugars), thus reducing the rate of insulin secretion. High circulating levels of insulin may contribute to hypertension, dyslipidemia, abnormalities in blood clotting factors, and possible vascular injury. Thus, fiber may reduce weight gain and other risk factors for cardiovascular disease.

This site is for informational purposes only, and is not intended to treat any illness or condition. If you have questions or concerns about your health, seek advice from your physician.