Gift of the Gods: Pear History 101

While traces of pears have been found in prehistoric areas in Switzerland, the modern(-ish) history of pears begins 7,000 years ago with a Chinese diplomat named Feng Li. After becoming obsessed with pears he devoted his life to cultivating, grafting, and spreading his favorite fruit as far as possible. By the time the Greek poet Homer wrote The Odyssey, he referred to them as a “gift of the gods.” Roman farmers documented their extensive growing and grafting techniques, while also hoping to appeal to the revered goddess of fruit, Pomona. This may explain why pears are part of the pome fruit family!

Much like the same fruit grown today, pears were valued for their versatility and long storage life—as well as for their beauty: paintings of pairs were found in the ruins of Pompeii, sixth-century church mosaics in Jordan, and renaissance paintings like Giovanni Bellini’s “Madonna of the Pear.”

With such a storied past, it’s not surprising that pear clippings were among the possessions colonists brought with them when they settled along America’s East Coast. While the favored fruit thrived in states like New York and Pennsylvania, they were mostly driven out by other crops and land development. Luckily, they survived long enough to be brought along for the cross-country journey west. The same trees that had been cherished, written about, and painted in Europe, eventually found hospitable climate and terrain throughout the Northwest.

How Pears Came to the Northwest

When 19th century pioneers arrived in the Northwest, they brought everything they treasured with them along the way: their families, their livestock, and yes, even their favorite fruits. But while the early American settlers that arrived in Oregon’s Hood River Valley planted the first roots of a prodigious pear industry, the fruit itself has a storied past.

Today, Washington and Oregon grow 81% of the fresh pears in the country, with over 700 growers. But when Henderson Luelling lugged two boxes of fruit tree sprouts from Iowa to Oregon in 1847, he was simply continuing a long history of cultivating what’s known as European pears.

As part of the Ring of Fire, the Northwest’s Cascade Range of snow-capped peaks volcanoes produce a rich, fertile soil that makes it prime pear country. The principal growing areas in the region are literally in the shadow of these mountains, which can rise over 14,000 feet above sea level. There, the warm days, cool nights, and abundant fresh water gave rise to pear orchards around the region. 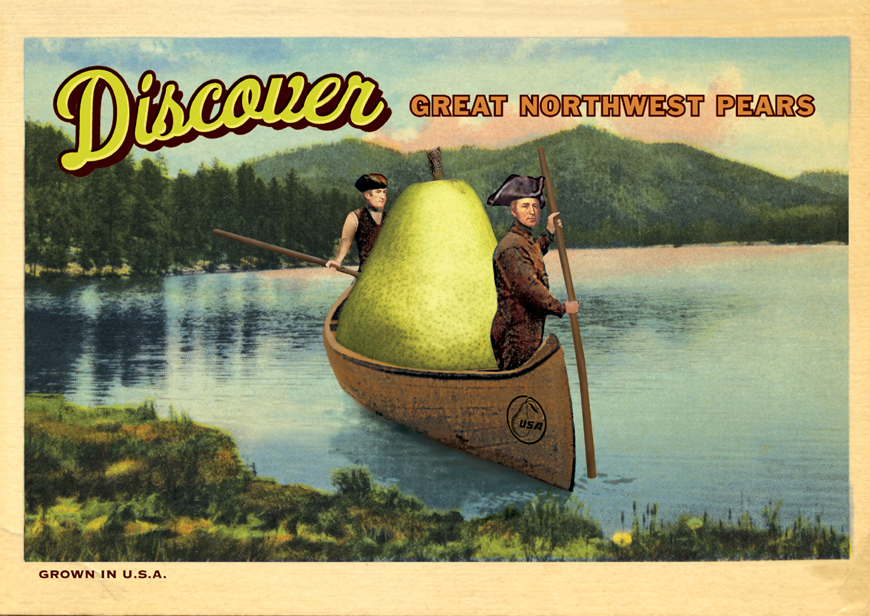 The European climate of the Rogue River Valley gave rise to the Comice variety, while the chilly Hood River Valley found economic stability through frost-resistant varieties. Further north, in Washington, the Wenatchee and Yakima Valleys flourished from the first plantings of the same heirloom varieties brought from Europe in the 19th century. Through the 20th century, orchards expanded and increased production around the Northwest, as irrigation capabilities advanced and new growing techniques applied. Committed pear growers invested in their land, communities banded together to support each other, and local universities studied the most productive and efficient ways to grow the fruits in the area.

The Northwest has grown to become one of the world’s largest pear growing regions, harvesting around 413,000 tons of fresh pears annually, and making Washington and Oregon the top states in fresh pear production in the US. While Washington often produces a larger volume volume, pears are Oregon’s top fruit tree crop and official state fruit—which makes sense given how well it fits in alongside the region’s culinary style. Versatile, delicate pears weave into the ingredient-focused cooking of the region, bolstering salads dotted with local cheeses and nuts, complementing the pristine seafood, even topping pizza, and as the perfect pair (pun intended) for the region’s acclaimed wines.

Northwest pears have thrived on the tree and on the plate in a big part thanks to the many ways chefs, scientists, growers, and even eaters united to care, sustain, and improve the industry. Today, pear orchards in Oregon and Washington are as specialized as the regions that support them. Organic, conventional, co-op, and multi-generational family orchards work together to continue the tradition of harvesting one of the world’s oldest fruit. They take pride in their role as part of the community preserving the know-how and continuing to look for new ways to improve and expand the production of high-quality fresh pears in the Pacific Northwest.

Posted in Tree to Table