Pear Bureau Northwest Presented Awards to 39 Retail Produce Personnel from Across the U.S. and Canada

Portland, Ore. (June 15, 2015) – Pear Bureau Northwest is pleased to announce the 39 winners of its second annual “Pear Up with USA Pears” display 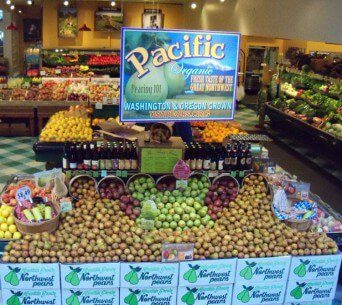 contest.  The contest invited all retailers from across the U.S. and Canada to build an eye-catching display that features Green Anjou, Red Anjou, and Bosc pears at minimum, with inclusion of other varieties of USA Pears encouraged. To qualify for the contest, the display was required to be maintained for at least one week during the January – March timeframe.

Entries were judged on a 100 point scale for appearance, creativity, and educational impact. Five bonus points were added to entries that included any of the jumbo size pears readily available this season.  As recognition for their participation, all who entered were awarded a gift card for Amazon.com valued at $20.

retailers,” noted Kathy Stephenson, Marketing Communications Director at Pear Bureau Northwest. “Selecting only a few winners was a difficult task, with many entries showing exceptional creativity. We appreciate everyone who created memorable displays and thank them for contributing to our pear category.”

Winners in each store category have received:

The winners for the 1 – 5 cash registers category are:

The winners for the 6 – 9 cash registers category are:

The winners for the 10 or more cash registers category are:

For photos of the winning entries, visit our webpage.

Pear Bureau Northwest is a non-profit marketing organization established in 1931 to promote the fresh USA Pears grown in Washington and Oregon, home to 84% of the US fresh pear crop.  The Bureau represents 1,600 growers and develops national and international markets for Northwest pear distribution.  For more information, visit www.usapears.org.