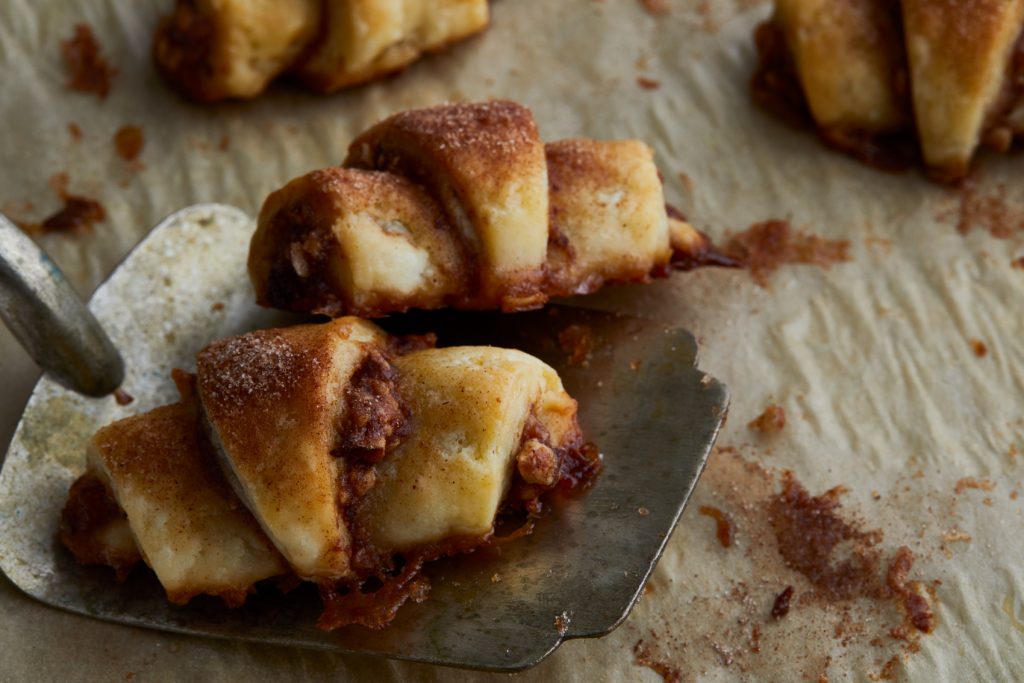 Rugelach, the crescent-shaped, cookie-like pastries filled with any combination of nuts, fruit, chocolate, and seeds, is a festive holiday treat of Jewish decent. Though they are commonly filled with dried fruits, like raisins, fresh pears diced extra small are a tasty twist. Pear butter adds another layer of flavor and allows the filling to stick to the dough as you roll them up. It can be found in the jam aisle at many supermarkets. The cream cheese dough is tender, flaky, and oh so easy to mix together, making this recipe a fun endeavor for families of any faith during the holiday season.

To make the dough: Using an electric mixer, beat the butter, cream cheese, sour cream, and salt until creamy. Add the flour, and stir by hand until the dough comes together. Divide the dough into three equal portions, and pat and press each into a smooth disk. Tightly wrap the disks in plastic, and chill the dough until firm but not hard, about 1 hour. (The dough can be made up to 2 days in advance and kept in the refrigerator; soften slightly before rolling.) 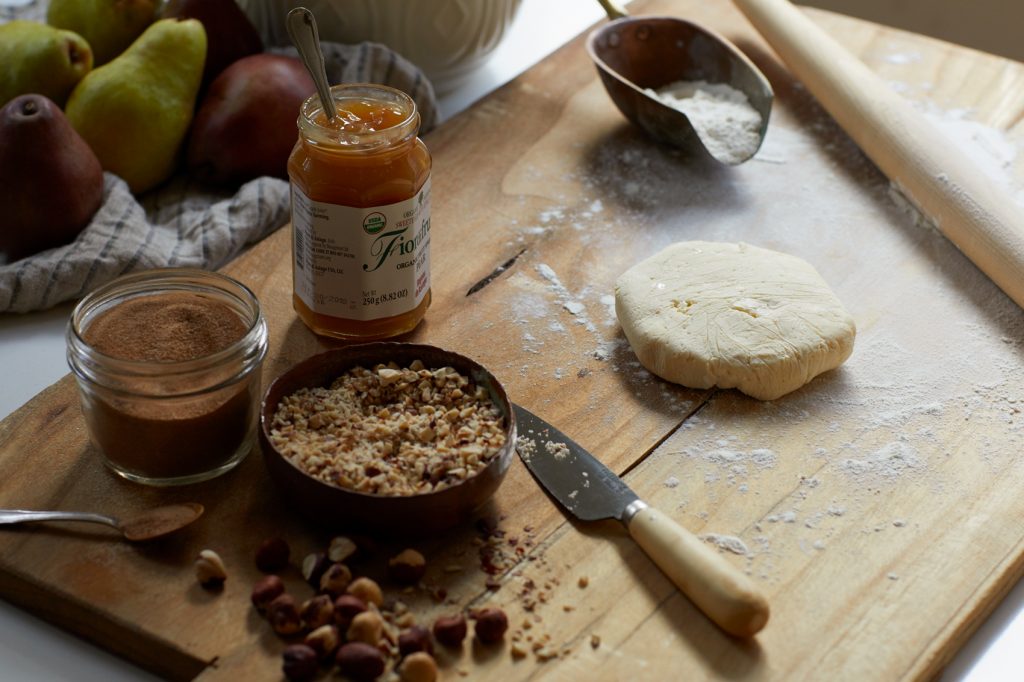 To make the filling: Stir the sugar, cinnamon, and salt in a small bowl. In a medium bowl, mix the pears, hazelnuts, and 1/3 cup of the cinnamon-sugar, reserving the rest to sprinkle the top of the rugelach later.

Dust a work surface generously with flour. Use a rolling pin to roll one of the dough disks into a 10- to 11-inch circle. Brush the surface evenly, all the way to the edges, with 1 tablespoon of the pear butter. Use a spoon and your fingers to spread about one-third of the filling mixture over the pear butter. Use a pizza or pastry cutter or long knife to cut the circle into 12 wedges by first cutting it in half, then in quarters, then each quarter into thirds. Roll up each wedge, beginning at the wide end and rolling toward the tip. Arrange the rugelach on a baking sheet lined with parchment paper, with tip sides pointing down. Repeat with the remaining two dough disks. 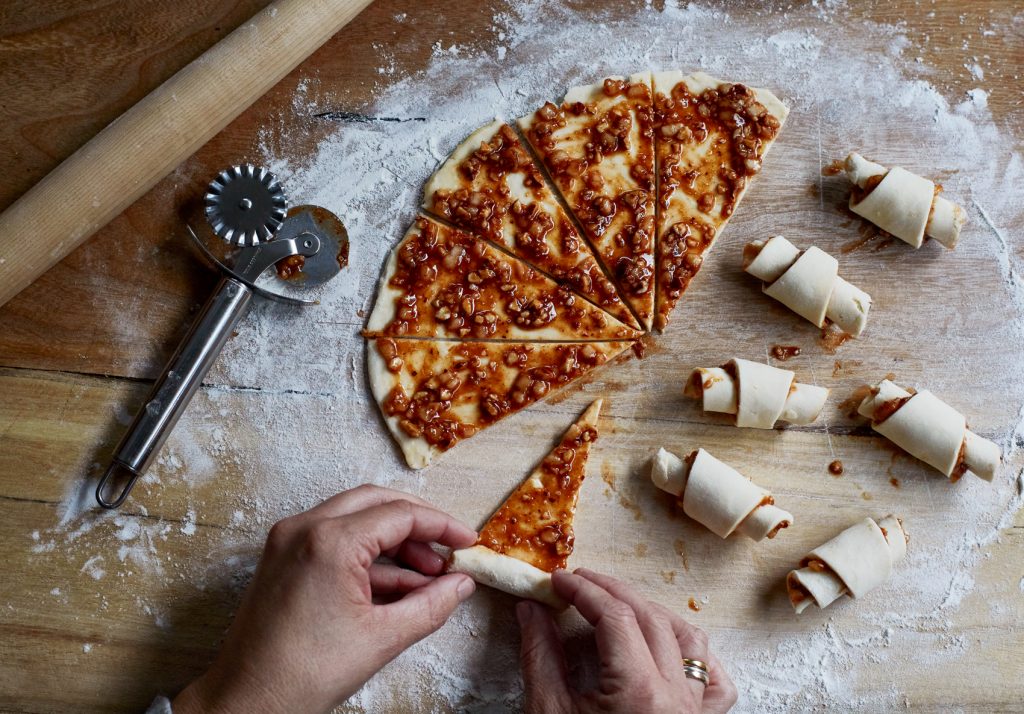 Brush the top of the rugelach with the beaten egg and sprinkle with the remaining cinnamon-sugar.

Preheat the oven to 350°F, and refrigerate the rugelach while the oven preheats.

Bake the rugelach until golden brown, 25 to 30 minutes. Remove them from the oven, and set aside to cool for at least 5 minutes. Serve warm or at room temperature.

Rugelach will keep, covered in the refrigerator, for up to 3 days, or wrapped tightly and frozen for up to 3 months. 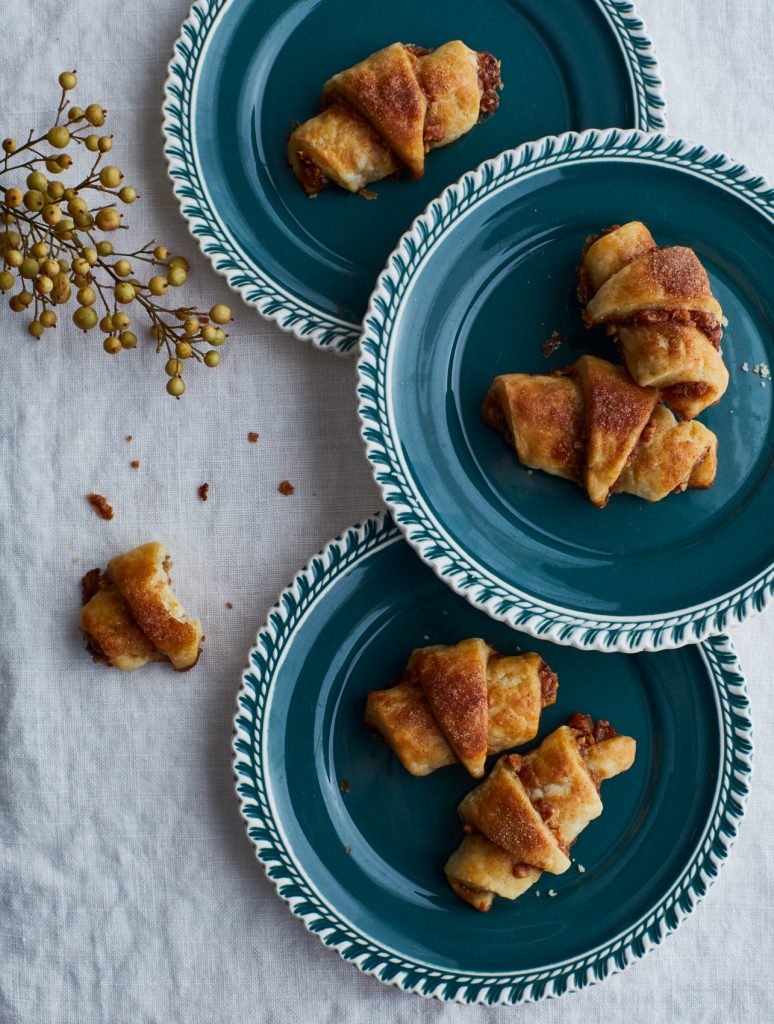 Andrea Slonecker an award-winning cookbook author and food stylist based in Portland, Oregon. Her books cover a range of food and beverage topics, including pears: watch for her Short Stack Editions Pears booklet, filled with 20+ original sweet and savory pear recipes, coming out in Fall of 2017.
View all posts by Andrea Slonecker →